Every year on my birthday I try to arrange a special shoot as a gift to myself. One year it was Shannon Million the famous Burlesque performer on a custom built motorcycle.

This year it was Nashville artist Ash Soto as Mictecacihuatl, “Lady of the Dead”. I’m a big fan of Dia de los Muertos and this is the year I decided to pay tribute to the holiday which takes place Nov. 2nd.   As for the creative direction of this series I wanted to include another interest of mine and that is the look of vintage Horror movies from the the 30′ – 50’s. Movies that featured actors such as Borris Karloff,  Bela Lugosi, Elsa Lanchester and Lon Chaney senior as well as Lon Chaney Jr. I’d say I mission accomplished. Below I’ve included an excerpt from a page that gives a bit of history for Dia de los Muertos. Read, enjoy and follow the link.

Day of the Dead

The Day of the Dead is a unique festival that is the result of 16th century contact between Mesoamerica and Europe. Conceptually, it is a hybrid, owing its origins to both prehispanic Aztec philosophy and religion and medieval European ritual practice. Ceremonies held during the Aztec summer month of Miccailhuitontli were mainly focused on the celebration of the dead. These were held under the supernatural direction of the goddess Mictecacihuatl.(1) Both children and dead ancestors were remembered and celebrated. It was also during this month that the Aztecs commemorated fallen warriors. According to Diego Duran, a 16th century Spanish priest, the Aztecs would bring offerings of food to altars in honor of the dead. They would also place small clay images that were supposed to represent the deceased on these same altars.

As the holiday comes closer as well as Halloween I will add more images to this post. For Now I give you these offerings upon the altar. 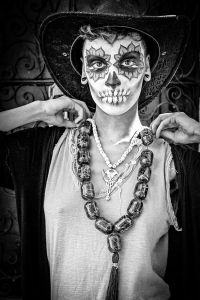 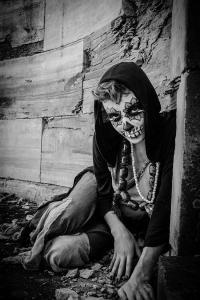 If you’d like to contact Ash Soto for modeling, consider that she also did her own make up. She’s multi talented and you’d do well to hire her. Her contact info is…https://www.facebook.com/ashley.mooney.779?fref=ts