I’d like to thank Justin Stokes for taking time the other day to get me going on blogging about my work. One of the many ideas we bounced at one another was detailing the evolution of my creative process.

For this first blog on the subject I will tell you about Evil Bess, also known as the evolution of a cover design, an exercise in stock photo usage and manipulation.

A while back on a engagement shoot in a small town I came across a porcelain doll that had been set up in a hair salon. I loved it. I took a little bit of time to get a shot with plans on just filing it away incase I ever needed a stock shot of a porcelain doll. A year later I came across an online site that hired designers to do covers for independent self publishing authors, for a flat fee of $600.00. Though not a great payday it was still not a bad, especially since this was for unknown authors. The selling point for me was this, a designer could choose the genre they wanted to design for with little if any restraint. I chose Horror. 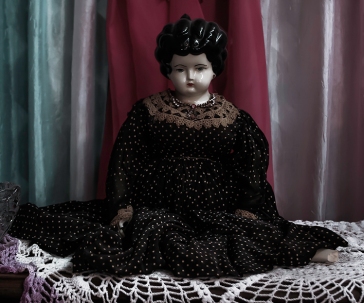 This is Bess as I found her.

I’ve always found porcelain dolls to be almost as creepy as clowns, with this in mind I went through my stock photos* until I found the doll I’d photographed a year earlier. Playing around in LightRoom to alter the over all lighting and temperature of the overall piece was my first step. Next I decided Bess (she looks like a Bess), needed a bit of damage. Inside my head I’d written a bit about Bess. That many years ago Bess was the last true evil witch in the country and as she was dying she consigned her soul to a porcelain she’d prepared for her death. Maybe she was truing to evade witch hunters? I dunno. But anyways she’d consigned herself to this doll. A century later her doll had been purchased in a curio shop by a young practitioner and was now in danger of breaking out!

Do I always make a backstory for my pieces, no, but it’s fun when I do. Opening up Bess in Adobe Illustrator I drew out  the cracks that appear on Bess’s face. Once done they were opened up in Adobe Photoshop then dropped upon Bess’s face as needed. Some of these cracks were inverted and then placed side by side, others received air brushing around them. Others were smeared in length while others shortened. Yes, I did actually research similar cracks to get the right look.  I decided that Bess needed some eye work. Once again I went to my collection of stock photos looking for doll eyes. Once found I took bess removed her original eyes and exaggerated their creepiness by erasing a large section of the skin around them. Next I took the new doll eyes and made them as a layer that would side under the areas that had been erased. After that a bit of black to give a cavernous effect to her stare really set it all off.

Was I done? With Bess yes. But not with the over all cover design. Next I took Bess and tilted her to the right to further increase the viewers sense of apprehension and fear. Almost done? No. No I wanted a font that would really offset the whole look. While I thought about going with a more Victorian font I ultimately went with something a bit more modern. After all Bess was an old witch but this was a modern story. Finally after a bit of airbrushing to the title I considered myself done. As done as I could be. After all the text would eventually change once an author bought the artwork and relaxed my mock title with their actual title.

I hope you enjoyed this first installment of the Process series.

If you’ve any questions or comments by all means leave me a message.